The Result of the Foreign Miners Tax Act

During the 1850s, California society was under a strong influence of the anti-foreigners act. The anti-foreigner act was well supported by the California legislative system. John Mason, a governor of the California Military, believed that foreigners who engaged in the mining business should be treated as an intruder of the state of California. Thus the legislative system created an act that tried to decrease the high percentage of foreign miners. Peter Burnett was an American politician who served as the first Governor of California. In 1850, Burnett and the California state legislature passed the anti-foreign immigration law, called Foreign Miners Tax Act. During this period, California was going through the discovery of the Gold Rush and many of the miners were Chinese immigrants called “coolies.” The act served the purpose of imposing heavy taxation on the foreign immigrants. The act also demanded every foreign miner to pay $20 U.S. dollars each month. Due to the heavy amount of taxation, many Chinese miners refused to pay the $20 tax and left the States. The increasing number of Chinese miners leaving the country due to the Foreign Miner’s Tax, the act was then repealed in 1851. In 1852 John Bigler, an American politician who served as the third Governor of California, also advocated for the Foreign Miners Tax and issued a $4 per month tax solely for the Chinese miners. The law stated that all foreigners who engaged in mining industry must obey the tax law. This discriminatory act caused a huge rebellion from the foreign laborers and their opposition was successful. The taxation of the foreign miners was lowered from $20 to $4 each month. Even though the act lowered the amount to $4 per month, many of the Chinese miners were only making approximately $6 a month. If they failed to pay the monthly tax, the Chinese workers were forced to give up their property and personal possessions. 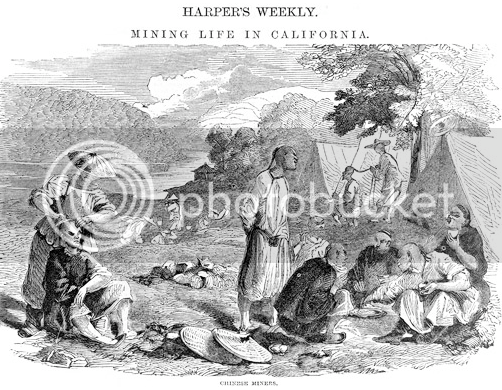 Many of the tax collectors abused their power and took advantage of the Chinese workers who could not speak English. In The Chinese in America: A Narrative History by Iris Chang, a quote found in one tax collectors’ diary stated: “I had no money to keep Christmas with, so sold the chinks nine dollars worth of bogus receipts.” The cruelty of the tax collectors grew to physical punishments such as whipping and beating. Although racism was at its highest point, many of the U.S. citizens opposed the Foreign Miners Tax Act, particularly due to their own understanding that the act was based on racial prejudices. Having the knowledge that someone stood up against such an appalling system during that time period in a way shows the humanity that was instilled within the society. Because Foreign Miners Tax Act the Chinese immigrants decreased during the 1880s, due to the high living cost and the racial discrimination. By the 1890 the Chinese population in southern California such as Los Angeles and its surrounding cities decreased to only 2%.

Posted by Mary Hungju Chen
Posted by Asian American Blog Group 9 at 12:43 AM